Well, with round 5 over and dusted just one round remains to settle the 2018 ABC Pipefitters Northern Rallysprint series. However that round will not be untill 9th September, this will be the South Auckland Car Club round in Maramarua forest….More to come on that later.

But what event the latest round turned out to be, firstly a massive well done to Lyndsay Homes and the Hamilton Car Club and all other marshal’s and helpers. With such a big field of 60 cars the event was superbly run and the way it was re-shuffled from previous events was credit to the car club.

Well done to Matt Jensen on taking his first victory of the series, he’s been so close on several occasions so a very deserving win, now that will make the last round very interesting!  The event did have it’s dramas with several rolls and breakdowns, all playing a very important part in the results.

The results & points tables will be updated in the next few days, apologies to a couple of you who had points missing from the last round, it will be rectified and will be on the new table once updated.

As mentioned above there was plenty of incidents and a full report and pictures  will be in ” A little bit sideways” magazine.

Thanks also to all the competitors that turned out in such large numbers to support both the event and the series, see you all at Round 6. 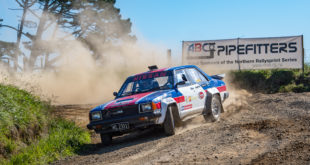